Posted on September 12, 2014 by Thrasymachus

I know it’s ok to admit this because I see others either doing the same or worse (ie. picking nose, reading papers, yelling on phone at someone). At least we car talkers have the potential to be constructive. 🙂

In the spirit of car talkers I’ve decided to start a new strand of blog posts that are, quite literally, produced as I drive to work.  No, I’m not tapping on that tiny Iphone keyboard and putting untold thousands of lives at risk.  I’m listening to CD books on my way to work and then recording reflections when the spirit moves me in audio format.

If for no other reason, at some point I’m sure someone I know will see me talking to myself and I can simply point to these traffic blog posts as evidence that I’m not completely insane. 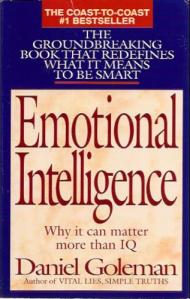 In my new position as an Educational Consultant for Region 11, I have about an hour to kill in the morning and another in the afternoon as I drive to and from work.  Despite some gray naysayers saying that I would regret the drive, I’ve decided to buy tons of books on CD and work my brain while I drive to work.

One of the books that piqued my curiosity recently is Emotional Intelligence by Daniel Goleman.  It’s a little bit of an older book, but I’ve heard there is no expiration date on true knowledge and awesomeness.

One of the habits I’ve gotten into for better or worse is the act of throwing my book down or turning off my book on CD when I come across something in Plato or Aristotle or in this book that really blows my mind.  I seriously have a physical reaction when awesomeness from a genius jumps the gap into my brain.  I literally have to put the book down or pause the CD and tell somebody about it or reflect on it.

For those of you that know me, this is why you get messages every once in a while that seem to come out of nowhere.  I have to convey and walk through the idea so I can better digest knowledge.

Today’s little gem: Institutions create formalize structures as a reaction to known tribulations from the past.  In other words, the formal bureaucratic structures or dogmatic efforts businesses, schools, and even people get into (that soon become ruts) were created as a reaction to a problem.  However,  Mr. Goleman goes on to say that the most successful institutions ALSO have a “soft” network of unofficial structures that act as a flexible net to deal with the unforeseen problems.  These organizations resist the temptation to formalize ALL associations because formalizing leads to calcification and calcification leads to rigidity.

Successful institutions/businesses/teams have informal structures (that mostly develop on their own) to deal with unforseen problems.  Since these are informal in nature, they rely less on the hierarchical power structure of a corporation, let’s say, and more on the social bonds created by people to like or respect each other.

The official skeleton of a highly successful organization is fleshed out by the unofficial social bonds.

The need for this to be social in nature, and thus dependent on Emotional Intelligence, is that the unofficial structure is less reliant on power and more on faith and support.  It is a different kind of structure that exists in everyday life outside of the office…but it exists none the less.

Since both structures are needed (one to deal with fires and escape routes and the other to deal with birthdays, deaths, and moral) the person “in charge” of both needs to live in each world as well.

The top 10% (or whatever metric one uses) are there because they understand those “unofficial” structures that exist in every business or organization and they honor it.  They know in the dogmatic structure, they are kings and queens…but in the unofficial pods across their real they may not be at the top of the pyramid.

In essence, they understand how the particular and the general fit together and flow together.  Genius!

2013 Northwest ISD teacher of the year, Humanities Texas 2012 Outstanding Teacher of the Year Award, and 2011 Outstanding Educator of North Texas Award (North Central Texas College). I'm currently a Regional Digital Learning Consultant with the Education Service Center Region 11 in Ft. Worth, Texas and a college government educator who incorporates philosophy, technology & humor. A student through and through, I walk with my students in their learning. Most importantly, I'm blessed with the 3 most perfect kids eva! I love on them ery day!!!
View all posts by Thrasymachus →
This entry was posted in In The Classroom, Political Philosophy and tagged Daniel Goleman, Daniel Goreman, EI, emotional groups, emotional intellignece, EQ, moral, morale, self esteem, Social Structure. Bookmark the permalink.