The Constitution is the greatest protector of rights ever penned by man’s hands. Simply by being a written Constitution, the document professes to be a touch-stone of liberty. Like a rulebook, if you want to know if someone is cheating in the game of government, you simply read the rulebook. Further, the genius that the American Founders invested into the U.S. Constitution becomes more and more apparent the closer it is scrutinized. The executive is the only nationally elected office, the Senate originally represented the states, and the House represents the communities within the states. Each level of the American experience is represented in our national government. The staggered elections of 2, 4, and 6 years keep emotion from seeping into the machinery too quickly. The list of wonderful mechanisms literally goes on and on: checks and balances, federalism, the amendment process, etc. 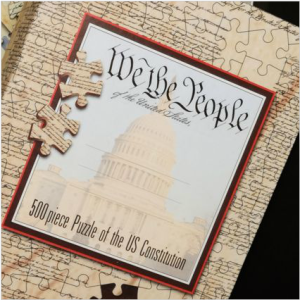 There is a glaring and often overlooked weakness or absence, however. Even before the attachment of the Bill of Rights and certainly after its inclusion, the U.S. Constitution claims/ed to protect individual rights. At the core of this venerable document the most important term, “right”, remains undefined. In other words, the U.S. Constitution claims to protect “rights”, but doesn’t define the term. So, one can ask, what exactly is the Constitution protecting?

To answer this question we must return to its inspiration; its spirit.

The Declaration of Independence does outline and establish an understanding of the term “Right”, but it will take more than a simple pedestrian effort to fully understand what Thomas Jefferson and, by extension, the Founding generation meant. The Declaration has imbedded within it a deep, complex teleological argument thousands of years in the making.

As Jefferson states in his May 8th, 1825 letter to Henry Lee, the Declaration’s authority rests on such things as the conversations of the day as well as the teachings of philosophic figures such as Aristotle1 . To flesh this out, let’s unpack one seemingly simple part of the Declaration of Independence: Life, Liberty and the Pursuit of Happiness.

The Declaration states that “We hold these Truths to be self-evident, that all Men are created equal, that they are endowed by their Creator with certain unalienable Rights, that among these are Life, Liberty and the Pursuit of Happiness.” A useful “trick” I use when unpacking text I’m familiar with is to walk, roughly, in reverse through the sentence or argument. So, in this case, we notice that our list of rights is categorized as “unalienable Rights” and that is prefaced by the word “among.” This denotes that there are more Rights that we are born with, but for some reason Jefferson (and by extension, the Founders…it was a unanimous vote to approve the document after all) have decided to rest on these three. There is a larger pool of other rights out there, but these three are crucial2. We must excavate via questions.

First, “Why these three?” These three rights, taken as a whole, define what it is to be a human being. To clarify what I’m getting at, let’s make a list of things that possess the first attribute “life”: broccoli, dogs, trees, humans, and squid. All of these things are alive. Now let’s throw in the next right that is mentioned: liberty. Life mixed with liberty strikes broccoli and trees from our list since they do not have locomotion. So far, dogs, humans and squid have made the cut. Add to this list, finally, the right to pursue one’s Happiness. Do dogs, humans, and squid all have the ability to pursue their happiness? In what way is “Happiness” used in this document? Further excavation is necessary.

John Adams writes “Upon this point all speculative politicians will agree, that the happiness of society is the end of government, as all Divines and moral Philosophers will agree that the happiness of the individual is the end of man.” The Virginia Declaration of Rights states that when men enter into a social compact they cannot give up certain rights. The last few rights mentioned are Happiness, property, and safety. “Happiness”, contextually speaking, cannot simply be dismissed as feeling safe or the acquisition of property. Finally, we find “Happiness” mentioned in George Washington’s First Inaugural Address when he says “there is nothing more certain in the economy of the universe that there exists an indissoluble union between Virtue and Happiness.” Virtue is the highest goal a human can pursue. The highest good is the right use of reason and that entails the pursuit of the good life. The pursuit of morality, then, is the pursuit of the highest happiness. Of course, there is a material aspect to this pursuit. But the pursuit of happiness does not end with the purchasing of a house or collecting a pile of apples3.

Finally, squids and dogs fall off of our list.

So, as we understand the definition of Happiness we come to understand the Declaration of Independence, the Constitution and, by extension, the American Political Project begun by the Founders.

Man is the only animal created to use his life in pursuit of a moral/virtuous end. Government’s job is to get out of the way and allow man to “find himself”, as it were. Government’s duty is not to establish the Happiness of mankind, but to let man establish this for himself as much as this is possible within civil society.

Tying all this back together, Natural Rights are a reflection of the self-evident truths we find in a Nature that was Created by Nature’s God and ruled over by the Supreme Judge of the World. The “rights” that the U.S. Constitution claims to protect are not all social agreements or local/regional wants. The fundamental ones are aspects or characteristics of human beings that, if absent, would reduce man to animal and give credence to the Machiavellian formulation of government.

A more perfect union is possible when the Declaration is allowed to inform and make more complete the original intention of the U.S. Constitution7.

[1] For a full search into this topic visit The Founder’s Constitution at http://press-pubs.uchicago.edu/founders and search “Happiness and Virtue” or “Aristotle”.

[2] Compare this to the purpose of the 9th Amendment as well as the first paragraph of the 14th amendment which was loosely based on Bushrod Washington’s list of rights in Corfield v. Coryell. Corfield v. Coryell was, in part, a brief attempt by Washington to make a list of some of the many Natural Rights “out there.”

[3] Read John Locke’s Second Treatise on Government, Chapter 5 Section 46: John Locke states that man can use his labor plus what he finds in nature to satisfy his needs and establish private property. Private property ends, though, when he acquires too much material to be used effectively and puts others at a disadvantage. However, in “the state of nature” there is no government to regulate this greed and, so, this pile of rotting apples is, effectively, ill used private property. To see a different take, read Plato’s Republic and Socrates’ claim that only those who can effectively use property should be allowed to “own” it. Socrates might say that the pile of rotting apples should have been distributed by someone to those who did not have apples. The point here being, “Happiness” is not simply acquiring property as some assume simply because Jefferson borrows from Locke’s “Life, Liberty, and the pursuit of property.”

[5] Compare this ordering of Rights with the Vietnamese Declaration of Independence to see how a reordering of fundamental rights can undermine the sanctity of the individual.

[6] For a further example, take a look at Jefferson’s use of the word “Men.” He means the Declaration to apply to ALL HUMANS. Look further in the document and you’ll see “governments are instituted among MEN”. Unless you’re willing to claim that only white males lives under governments, contextually, at least, you’ll need to admit that all human beings and “MEN” are the same thing. Further, take a look at the paragraph where he complained about the keeping open “a market where MEN are bought and sold”. Again, women and children were sold into slavery, not just males. “Men” have rights, which is to say, all human beings are born with rights. Bad government and bad laws take these rights away, not Nature or God. There are no classes of men.

2013 Northwest ISD teacher of the year, Humanities Texas 2012 Outstanding Teacher of the Year Award, and 2011 Outstanding Educator of North Texas Award (North Central Texas College). I'm currently a Regional Digital Learning Consultant with the Education Service Center Region 11 in Ft. Worth, Texas and a college government educator who incorporates philosophy, technology & humor. A student through and through, I walk with my students in their learning. Most importantly, I'm blessed with the 3 most perfect kids eva! I love on them ery day!!!
View all posts by Thrasymachus →
This entry was posted in Political Philosophy and tagged 1776, American Founding, civics, classroom, constitution, Declaration, declaration of independence, education, Founding Fathers, Freedom, government, Hamilton, jefferson, natural rights, philosophy, political philosophy, Political Science, rights, social studies, U.S. Constitution, US Constitution, washington. Bookmark the permalink.

2 Responses to The Incomplete Constitution